Whole grains (also called cereals) are small, hard, dry seeds that grow on grass-like plants. They are staples for most populations around the world. The most widely consumed grains are wheat, rice and corn (botanically, corn is a grain, but from a culinary sense, it tends to be used as a starchy vegetable). Other popular grains are barley, rye, oats, kamut, spelt and millet. Pseudograins such as amaranth, buckwheat, quinoa and wild rice, are similar to grains in both their nutrition and culinary uses, but they are not in the same botanical family.

Are Whole Grains Healthy Foods? Absolutely! Whole grains provide about half of the world’s protein and fiber. They are rich sources of B-vitamins (especially thiamin and niacin) and vitamin E. They are also good sources of minerals, including manganese, selenium, magnesium, phosphorus, iron, zinc and copper. Whole grains contain a variety of phytochemicals and antioxidants.

Are Some Whole Grains Healthier than Others? Yes, there are several considerations when trying to select the healthiest whole grains: 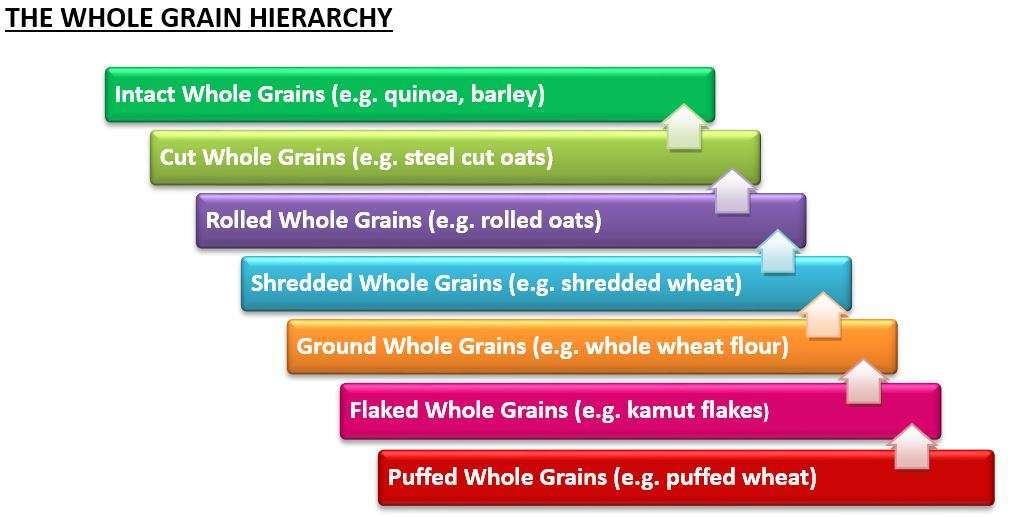 Why are refined grains less healthful? When grains are refined, most of the fiber, vitamins, minerals and phytochemicals are lost. For example, when we turn wheat into white flour, we lose about 80-90% of the fiber, 70-80% of the vitamins and minerals and 90% of the phytochemicals.  No one sits down to a bowl of white flour. Before eating white flour, fat, sugar, salt, colors, preservatives and/or flavor enhancers are added, then white flour is transformed into bread, crackers, baked goods, etc. For optimal health, we want to avoid or minimize the use of refined grains (e.g. white flour, white rice, couscous, white pasta, etc.).

How many servings of grains are recommended per day? Many food guides suggest about 5-8 servings of grains per day, at least half of which should be whole grains. Of course, for people needing less calories than most, intakes would be lower, and for those needing more calories than most (e.g. athletes), intakes would be higher. For optimal health, most, if not all grains should be whole, preferably intact, broken or rolled.

Should gluten be avoided? Not necessarily. An estimated 6% of the population is sensitive to gluten. Affected individuals need to minimize their intake, and people with the most serious form of gluten sensitivity (those with celiac disease) must avoid gluten completely. Others can generally include gluten-containing grains without adverse affects. If there is a question, testing can be done.

Is bran a good choice? Although bran is extremely high in fiber, it can interfere with nutrient absorption. So, for most people eating plant-based diets, it is best to minimize use (except when it is present as part of a whole grain!).

What type of bread is most healthful? Bread is a very popular food around the world. Unfortunately, it is generally flour based and is light and fluffy, hence has a big impact on blood sugar. The good news is that not all breads are equal, and some can be quite healthy. Sprouted breads (bread made from sprouted grains and dehydrated or cooked at a low temperature) such as manna breads are an excellent choice. Breads made from sprouted grain flours are preferable to regular flour breads but still can be quite light and fluffy. Generally, the denser the bread, the more slowly it is absorbed, and the more healthful it is. Breads containing intact grains, nuts and seeds are better choices. Very heavy breads (e.g. breads you can practically stand on) are best. Sourdough bread is less likely to cause food intolerance, and is more slowly absorbed than reduced. 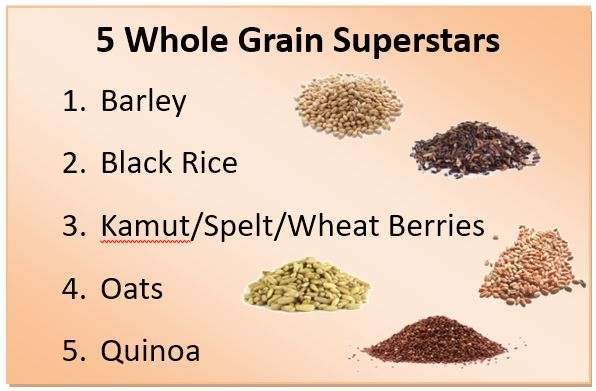